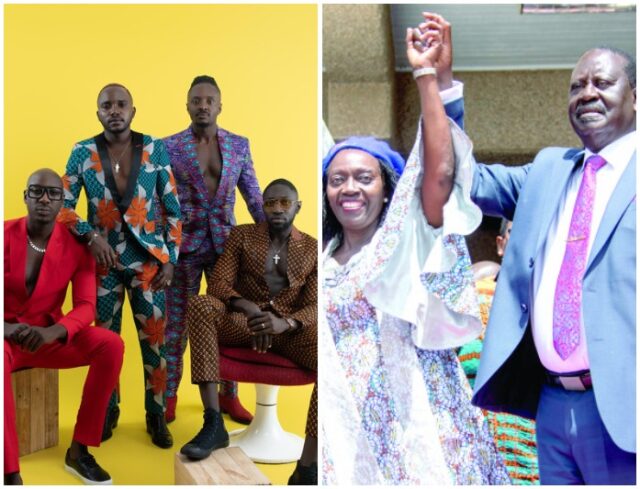 Bien is seeking to milk Raila dry as the Azimio leader dispatched his lawyers to reach out of court settlement for their dispute.

Azimio la Umoja One Kenya Coalition Party is willing to pay Sauti Sol for using their song on May 16th during the unveiling of Martha Karua as its running mate.

Nation newspaper reported that Raila reached out to Sauti Sol an attempt to resolve the row over copyright infringement for the use of the song “Extravaganza” without consent.

Head of Sauti Sol’s legal team Moriasi Omambia told the daily that while nothing has been agreed upon yet between the two parties, Azimio was willing to pay the band.

“I won’t comment on the progress made on the matter, but what I can confirm to you is that Raila and Azimio are more than willing to resolve the matter amicably,” Omambia stated.

Omambia disclosed that Azimio lawyers and himself were working to resolve the infringement row.

“We acknowledge their willingness to quickly resolve the matter at hand,” he said.

In an interview with Milele FM, Sauti Sol lead singer Bien stressed that music is their core business and thus are ready to protect their hustle at all costs. The star maintained that they won’t let the legal battle go.

“I’m just doing my business and anyone who wants to use my music for their own benefit, I must, first of all, give consent. Secondly, I must be remunerated according and the money is sustainable for the business. But in this case, we were never asked and they went ahead to use our music in whatever they were doing, which is against the law,” Bien Said.

Asked what amount of money they were seeking as compensation, Bien revealed that they would love to be paid a figure not less than a billion shillings.

Titi Maasai - April 11, 2022 0
KOT thought Esther Musila,52, was incapable of getting pregnant for her husband Guardian Angel because,33, because of her advanced age. Musila has always reacted angrily...