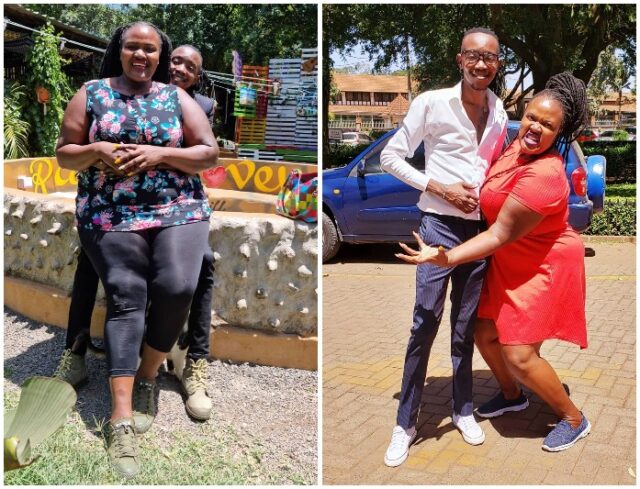 Sandra Dacha can’t wait to be in the bedroom alone with her boyfriend Akuku Danger, the two lovebirds can’t go home yet because of Ksh2 million hospital bill.

Akuku Danger suffers from sickle cell anemia, a chronic condition which lasts through a person’s lifetime.

The Churchill show comedian was admitted in hospital in late December 2021 after his condition worsened.

On Monday January 24th, Dacha reported that Akuku had finally been discharged from Nairobi West Hospital, but he was not allowed to leave the facility until the bill is cleared.

She appealed to well-wishers to help them raise Ksh2 million to offset the hospital bill, the only hurdle preventing Akuku and Dacha from going home together.

A fundraiser that brought together comedians, actors and actresses was held for the comedian Thursday.

Artistes managed to raise about Ksh164,000 that will be used to partially settle part of the hospital bill.

Speaking to the press, Dacha said the contributions will be continuing until she manages to get Akuku Danger home.

The voluptuous actress also said that she is keen to have Akuku Danger home because she is yearning to get laid.

Dacha euphemistically described how she will smash her boyfriend when they ultimately get home.

“Akuku is my Bae…he is my boyfriend. Now that he is healed, Kijana anafaa aende nyumbani, akule na akule ndio apone kabisa. Kijana saizi hakuli vizuri. (dude needs to go home so that he can ‘eat’ and ‘eat’ in order for him to heal properly) If you gerrit you gerrit,” Sandra Dacha said.

Dacha further revealed that she has been dating Akuku for one year. He said that they rhyme because she is plum and he is thin.

“Unajua dawa ya balloon ni sindano. He is my type. Akuku has a heart of gold…then his smile…oh my God. He is a good person,” said Dacha.

Best Public Universities In Kenya In 2021

Noti Flow: Am Never Going Back To Dating Men Even If My Lesbian Partners...