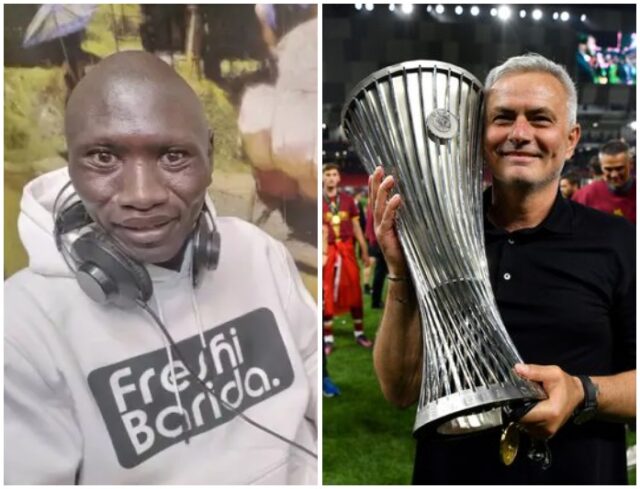 Stivo Simple Boy has just gone international thanks to Italian football club Roma which is managed by Jose Mourinho.

Mourinho made European football history as Roma won the inaugural Europa Conference League with a 1-0 triumph over Feyenoord.

The victory means the legendary Portuguese manager is the first coach to win every major European competition having also lifted the Champions League and Europa League.

Having not gotten his hands on silverware since leading Manchester United to Europa League glory in 2017, it was very apparent that Roma’s Conference League triumph meant a lot to Mourinho.

The 59-year-old struggled to hold back tears as he reflected on a season that Roma fans will remember forever.

“There are so many things going through my head. So many things at the same time. I’ve been at Roma for 11 months, I realised the moment I arrived what it meant, they were waiting for this. As I told the lads in the locker room in Turin, we did what we needed to do, qualify for the Europa League. We had great work all season,” Mourinho told Sky Sport Italia through tears.

‘Freshi Barida’ became a popular phrase after Stive Simple Boy released a song with the same title on April 27th 2022.

His management in a statement said Stivo Simple Boy now owns the exclusive rights for the use of this slogan as per legal authorities.

“Any use of the slogan in advertisements or promotion of products, events or for any other commercial purpose without notice will lead to legal charges as per the authority agreement,” they said.

Titi Maasai - April 6, 2022 0
Wangui Ng’ang’a has been spending a lot of money spoiling 22-year-old Thee Pluto, the two have been claiming they are 'just friends'. Hawkeyed netizens first...