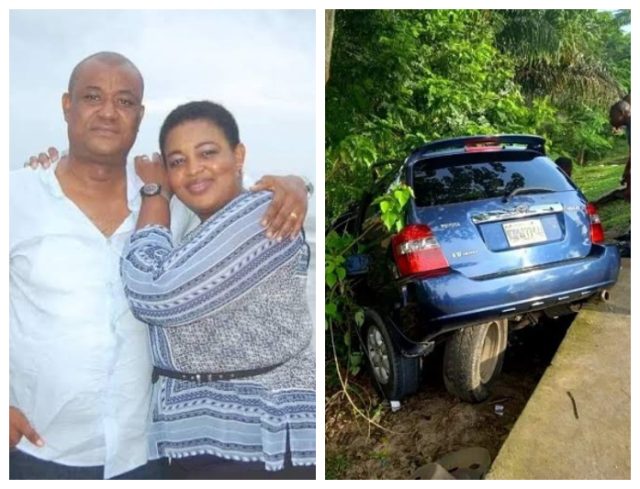 Lawyer Claret Opara Bassey died in a car chase as she wanted to confront her cheating husband Sunday Bassey who was in the company of his side chic.

Claret perished on Sunday September 18, 2022, when her car veered off the road and rammed into a tree in Calabar, Nigeria.

The deceased lawyer had been informed by one of her friends that her husband was sighted at a shopping mall with his side chic Laticia.

Claret rushed to the mall to bust her cheating husband but when she got there he spotted her from a distance and hurriedly got into the car with Laticia.

The lawyer chased after her fleeing husband in a dramatic car chase that ended in a horrific accident.

She then lost control of the car and rammed into a tree, leaving her seriously injured and the car badly damaged.

Eyewitnesses said immediately the husband immediately made a U-turn after he saw his wife’s car getting involved in the accident.

The side chic got off the car and fled the scene while the lawyer’s husband rallied to rescue his wife.

Witnesses say the tearful husband apologised to his wife who was in a pool of blood.

“He was apologetic before the dying wife and pleaded that she should not die. He rushed the wife to Navy hospital in Calabar where she was reportedly confirmed dead,” an eyewitness told The Nation.

The deceased and her husband had been married for over 10 years and had three kids together.

Friends of the couple said they started dating while they were students in campus.

Eliud Kipchoge’s Crazy Net Worth Will Shock You