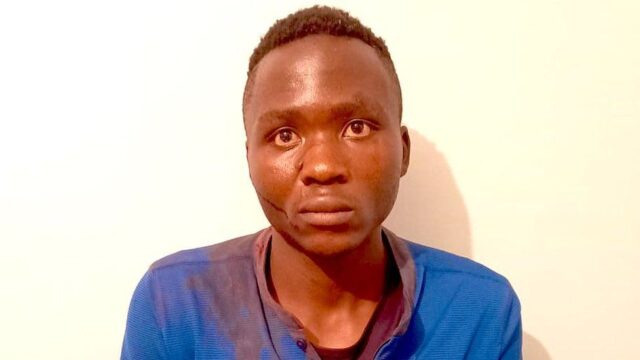 The Directorate of Criminal Investigations has issued a statement after the demise of suspected serial child killer Masten Milimu Wanjala.

Wanjala was lynched by an irate mob in his home village in Bungoma county two days after disappearing from Jogoo Road Prison.

DCI said that they were determined to to ensure that Wanjala pays for each and every crime he committed in the court of law but unfortunately that was not achieved.

“The Directorate of Criminal Investigations was determined to ensure that the suspect faces justice in a court of law for each crime that he committed. However, the law of the jungle as applied by irate villagers prevailed,” DCI statement reads.

DCI noted that Wanjala was arrested in July  for the cold murder of at least 10 children.

“On July 14, 2021, DCI special service agents and homicide detectives arrested Masten Wanjala, a serial killer who was behind the cold blooded murders of at least ten innocent children,” DCI stated.

Following his arrest, investigations were conducted by detectives which placed Wanjala at different crime scenes.

“His arrest followed a forensic investigative trail that brought together top detectives and experts drawn from different specialized units within the DCI. Their findings placed him at the scene of at least 10 murders, the first being the execution of 12-year-old Purity Maweu, five years ago in Machakos county,” DCI further stated.

According to DCI, the suspect was only 15 when he killed Purity before sucking her blood

“This marked the beginning of a spate of child disappearances and executions, that left parents and guardians worried on the safety of their children,” DCI added.

After his arrest, Wanjala confessed to the detectives for every murder that he had committed and was facing murder charges. He has since been in custody until his mysterious disappearance 2 days ago from detention.

“Special Service agents had been on his trail in Western Kenya, but unfortunately he was spotted by villagers in Mukweya, and beaten to death before our agents re-arrested him,” the statement reads.

DCI further consoled families of those who lost their loved ones in the hands of the suspect.

“Our thoughts are with the families of those who lost their innocent children in the hands of the suspect. We reiterate our commitment to ensuring that we continue to serve with Dedication, Care & Integrity and call upon the public to continue partnering with us in this endeavor,” DCI said.

RELATED STORY: Hubby To Agnes Tirop Never Wanted Trainers To Touch Some Parts Of Her Body

Lillian Muli: My Father Forced Me To Pursue Career In Media