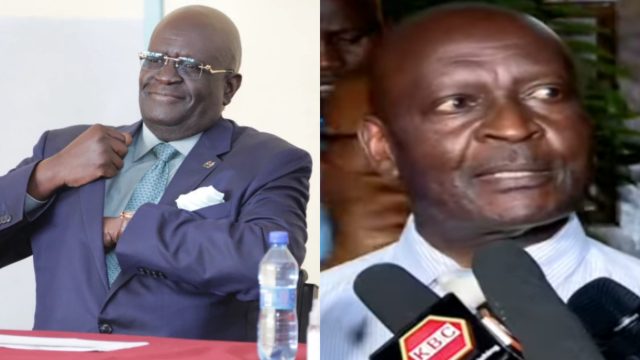 Magoha died on Tuesday at 5.30 pm while at the Nairobi Hospital where he had been rushed for immediate medical attention. He died of cardiac arrest.

His close  friend and colleague, Pro. Walter Mwanda was among the people who had final moments with him.

Speaking to the media, Mwanda revealed that Magoha’s wife reached out to him asking for his assistance urgently.

It was around 3pm and he was at Kenyatta National Hospital attending to a patient.

He was forced to handover the patient and rush over to Magoha’s residence.

“I rushed to my car and as I was driving away from Kenyatta about 4km  she called again and asked me whether I had a blood pressure machine, I told her I would get one,” Mwenda narrated.

He returned to the hospital to get the machine before resuming his journey.

4km before reaching Magoha’s home, Magoha’s wife asked him if  could get an ambulance. He decided to head straight to the home because of the traffic jam  and was immediately ushered to where Magoha was.

“He was actually seated. He greeted me and said Ooh you’ve come. I said we should take the blood pressure. At that time he slipped off from his sitting position. We carried him to the car,” Mwenda said.

They took him to Nairobi hospital to hospital where he collapsed. According to Mwanda, his son resuscitated him back and just as they were 100m to the Casualty he collapsed again.

“He was rushed to Casualty. There was resuscitation again which took quite a little bit of time but they were not able to revive him. That was a short message but I know is that he was waiting for me because he had told me somethings about his life and final days and that has been fulfilled and I shall continue  doing so,” he said.