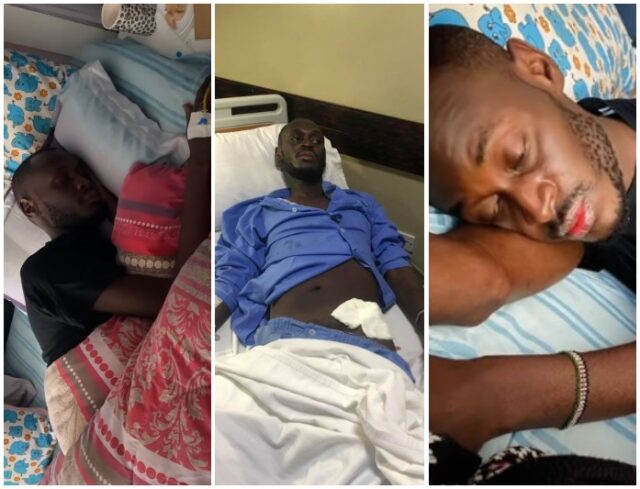 King Kaka nearly died in 2021 after he was misdiagnosed. Doctors gave him 30 days to live but by the grace of God, he managed to recover against all odds.

The rapper dropped a new album dubbed ‘2nd Life’ which is inspired by the events of last year when he was on his deathbed.

King Kaka’s wife narrated how her husband’s sickness affected their daughter in a post on social media where she shared one of the songs from the rapper’s new album.

“As a first hand beneficiary of our Lord’s Mercy and unmerited Grace, King Kaka is doing a FULL album celebrating what God has done for him privately in public.

“When he asked me to make a cameo in his lead single,the only thing that I asked is what the synopsis looked like. I hadn’t heard the song before.I wanted to hear all these songs when they were out.

“I wanted to wait in anticipation just like everyone else. Then I walked into the set and the first thing I saw was the bed and him almost exactly clad like he did at the hospital,needless to say I couldn’t stop crying for a couple minutes.

“I was relieving those moments-Again and again. Those that have had their loved ones in hospital at the brink of death will relate to what I’m saying.

“Then watching our kids right there and how Geezy finally found out that her dad was in the hospital and questioned. How she had to go through guidance and counseling because of the detrimental effects that had on her 😢

“To everyone that prayed for us, thank you 🙏 IMMENSELY 🥹

“To anyone fighting right now..whatever kind of battle, just know that God had heard your prayers. Keep knocking that door relentlessly for it shall open in His timing ❤️

“King, thank you for healing many souls with this. Thank you for fighting ❤️ I love you ❤️,” Nana wrote.

Lillian Muli: My Father Forced Me To Pursue Career In Media