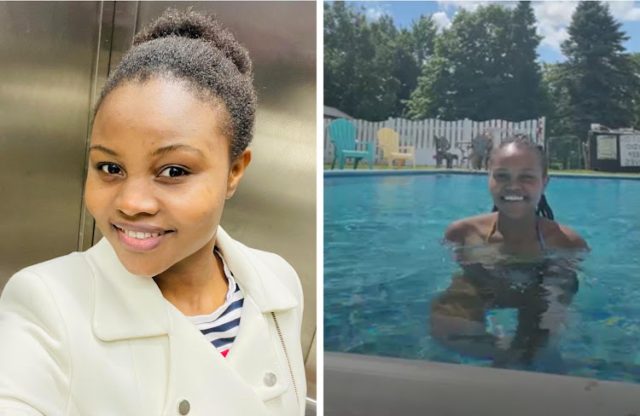 Alphonce Nyamwaya, the boyfriend of the late Canada-based Kenyan nurse Hellen Wendy Nyabuto, has come out to speak on her tragic death.

Hellen Wendy met her death while live-streaming her swimming session on Facebook.

In the video which went viral on social media, Wendy is seen engaging with friends on her Facebook page before she moves to the deep end of the swimming pool.

The Canadian-based nurse began to sink while on the deeper end of the pool. She screamed for help in vain.

It’s not until three hours later that visitors who come to the swimming pool notice her body and stop the livestream.

Wendy’s boyfriend Alphonce Nyamwaya while speaking about her death revealed that his late girlfriend called him before she went for a swim.

“I was preparing myself for the afternoon shift when she gave me a video call. She told me she was headed to the swimming pool to relax after completing her morning shift. She inquired whether I had eaten before we said goodbye to each other,” he said.

Nyamwaya further revealed that the swimming pool where Wendy drowned was in a private residence.

Staff - September 21, 2021 0
De La Rue is a British Company that manufactures polymer and security printed products such as tax stamps and banknotes. Though the company is headquartered...