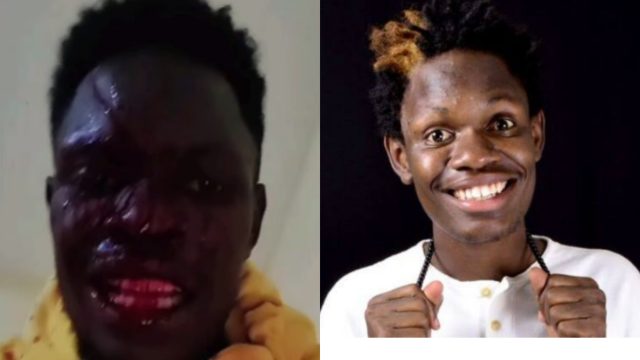 Comedian and YouTube Video creator 2mbili was allegedly assaulted by his baby mama.

The information was made public by Kiss FM presenter Oga Obinna, who said that 2mbili has been suffering in the hands of the woman for a while.

“This has been happening for a while now.
From Kupigwa,kudungwa na kisu,kuchomwa na maji moto,kufungiwa inje, watoto kupigwa just to hurt the dad to many more (2mbili has all the evidence ) but He chose to stay for the kids and keep quiet,” Obinna wrote on Instagram.

He further said that he decided to speak about the matter before it was too late.

According to him, they have tried seeking help from different institutions without success.

“Nobody is there for boychild!! We have gone even to the police station plus GBV offices and NOTHING WAS DONE. Boychild you are on your own.!!” Obinna said.

He also shared a video of 2mbili’s blood stained face which was a as a result of the latest assault. According to him, 2mbili is the one who send him the video.

In the video, 2mbili admits that this was the third time his baby mama was assaulting him but he has always remained silent about the issue.

Below is the video of Obinna narrating 2mbili’s hardships in the hands of his baby mama.

The incident  comes barely days after 2mbili celebrated his 30th birthday with friends.

Paula Reveals The Type Of Man She Wants To Date After Breaking Up With...