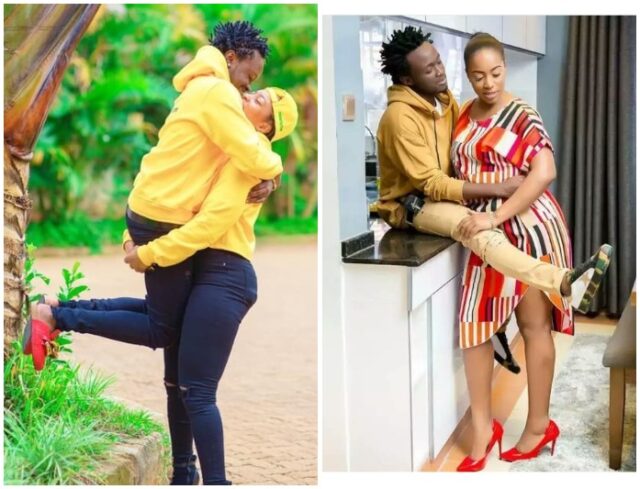 Diana Marua was ruthlessly trolled after her younger husband Bahati broke down into tears during a press conference.

Kenyans on Twitter (KOT) aimed a dig at Diana after Bahati wept following Jubilee party’s decision to ask him to drop his bid to vie for Mathare MP seat.

KOT while referring Bahati as ‘ mtoto wa Diana’ poked fun at the singer for crying like a baby.

Tears ain’t getting incels, cry babies or clowns like Bahati any electives seats this year. Seems Jaguar wasn’t courteous enough to share the memo with Diana B’s Ben-10.
Voters are rejecting actors like Itumbi kidnapping himself or that Mombasa UDA guy faking his assassination.⛳️

The other day, they denied someone a ticket because he’s Raila’s age mate. Today, wananyanganya Bahati Mtoto Wa Diana ticket. Who do they want?
Not old, not young?

Diana did not prep his PA well??? ama ni part ya strategy pic.twitter.com/wSfA9rIvgy

Bahati should consider crying like a baby on the laps of Diana Marua… It is shameful for a man to cry and whine as if it was a matter of life and death. Bahanye is weak punnylambistic… Mathare deserves an assertive leader

Diana has since come out to give her baby husband a shoulder to lean on after Jubilee party made him cry a river.

“Every Dark Cloud has a Silver Lining. It’s Tough but We shall Overcome. @BahatiKenya Stay Focused on the Greatness that lies ahead of you and the people of Mathare ?,” wrote Diana.

Akothee Struggles To Get Appropriate Wedding Venue Because Of Her Dad

DJ Crème Speaks On Cheating On His Wife, Their Separation And Reunion

PHOTOS: Nyota Ndogo And Her Mzungu Husband Get Seriously Cozy On SGR Train