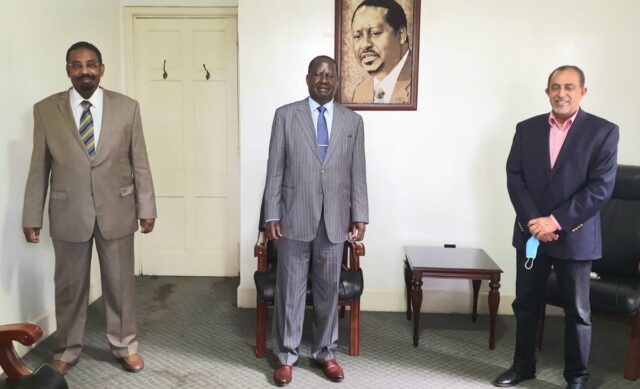 Raila Odinga’s close friend is very much convinced that Raila Odinga won’t see the President’s seat in the upcoming general elections in 2022.

Farah Maalim has observed the ground and he is sure that Raila Odinga won’t beat UDA Presidential hopeful and the incumbent Deputy President William Samoei Ruto in 2022.

Farah Maalim has always had faith in Baba for years and everybody knows it, it’s never been a secret but this time around, he’s more than sure about William Ruto becoming the 5th President of Kenya, and not his long term friend Raila Odinga.

Maalim who was once in ODM but defected to Kalonzo Musyoka’s Wiper Democratic Party said that Ruto will win and not just win but win in a landslide.

He said this speaking in an interview earlier today.

“In the likely event that the presidential contest will be between Raila and Ruto, Ruto will win hands down,” Farah Maalim.

Farah Maalim commended Deputy President William Ruto for always being generous which is a trait that the former Prime Minister of the Republic lacks.

“People say he is corrupt, but even if he is corrupt he is an extremely generous person and that works well for him,” Maalim said, going ahead to add, “He knows how to put his message together. Deceitful as it may, but you cannot ignore it.”

Maalim, who is the former Deputy Speaker of the House also had something to say about Ruto’s alleged fueling of class war in the country.

“Ruto wants to take advantage of an economic class and create a revolution and that is dangerous. OKA (One Kenya Alliance) is the only hope we have,” he said.

Wahu Vividly Recalls How Her Father Stopped Her From Committing Suicide

Bien’s Wife Chiki Painfully Hits Back At Female Critic After Being Slammed For Showing...