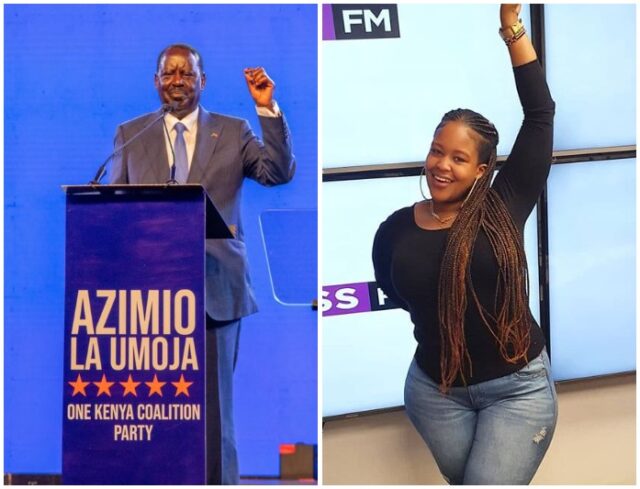 Kamene dismissed Raila’s manifesto while speaking on her show on Kiss FM on Tuesday.

“There is zero tolerance for corruption,” Kamene’s co-host Obinna said while making reference to Raila’s manifesto.

“When have they ever promised that and delivered by the way?” Kamene responded to Obinna.

Obinna picked another item from the manifesto, the reduced cost of living, to which Kamene asked how Raila was planning on achieving that.

“How are you going to do that? Right now we are badly crying, things are bad,” Kamene stated.

Obinna told Kamene to wait for the Azimio presidential candidate to ascend to power to see how he will implement his promises.

“But he is already inside (the government/with power) as it is…” she said.

Related: Kamene Goro Gets Second Chance To Polish Her TV Career After Leaving Everything Behind To Get Married

Man Lands A Job At Google After His Girlfriend Kept Nagging...

Pastor Jill - February 16, 2022 0
A man is one happy and lucky man on earth right after his dream of getting to work in Nigeria came to fruition. The man...