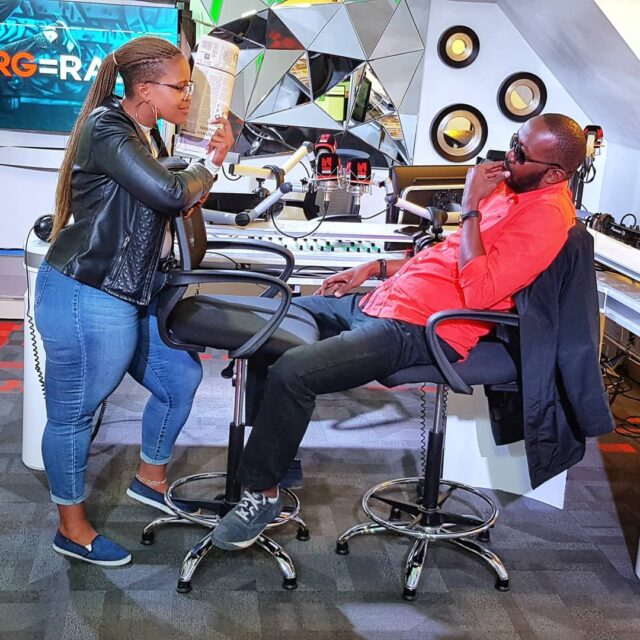 Radio presenters Kamene Goro and Andrew Kibe were good friends since 2018 until 2021 when they clashed and severed all ties.

Kamene and Kibe got close before NRG Radio was launched, they were paired to host the station’s morning drive which begun on 1st March 2018.

The duo worked together until June 2019 when they jointly quit NRG Radio after being poached by Kiss FM.

Kamene and Kibe were supposed to officially begin working at Kiss FM on Monday from July 1st 2019, but NRG dragged them to court for violation of a non-compete clause in the presenters’ contracts.

The two stayed off air until September 2019 when struck a deal with their former employer NRG Radio.

According to reports, Kiss FM owner Radio Africa Group reached an out of court settlement with NRG Radio allowing Kamene and Kibe to go on air.

The two worked together at Kiss FM until June 30th 2020 when Andrew Kibe officially quit to start his own internet radio which flopped terribly.

A year later in September 2021, Kibe picked a fight with his former colleague Kamene when he took a dig at media personalities for keeping quite and not speaking for the suffering Kenyans.

“These guys, Eric Omondi, said nothing. Jalas said nothing, Kamene Goro, nothing. Betty Kyallo, nothing. None of this motherf*s have opened their mouth to say that wakenya wananyanyaswa… Everybody is quiet,” wrote Kibe.

However, in a fit of fury, Kamene Goro replied to Kibe warning him to keep off her name.

“Me??? Surely?? Seems you stopped listening to radio since you left? Bro, keep current, don’t draw me into these rants of yours, respectfully. I am always on the front line,” Kamene wrote.

The clash between Kamene and Kibe marked the beginning of the end of their friendship. In a January 2022 interview with Dr. Ofweneke, Kamene said she blocked her former radio colleague because he became toxic.

She explained that after they stopped working together, she tried to maintain a clean friendship but Kibe did not respect that. She reached out to him, but he constantly kept attacking her, hence the reason she blocked him.

“I don’t miss Kibe. Recently, I tried to maintain our friendship after we stopped working together but he just became really toxic of late,” she said. “He has been out of the country and I have no idea what is going on. When he started attacking me and dragging my name into his mess. I was like, yoh! I am just here minding my business.”

Asked if the two had a beef, Kamene said they had no bad blood and she even wished him a happy birthday last year.

“I Told Zari My Problem Of Having Many Ladies” Diamond Comes Clean On Being...