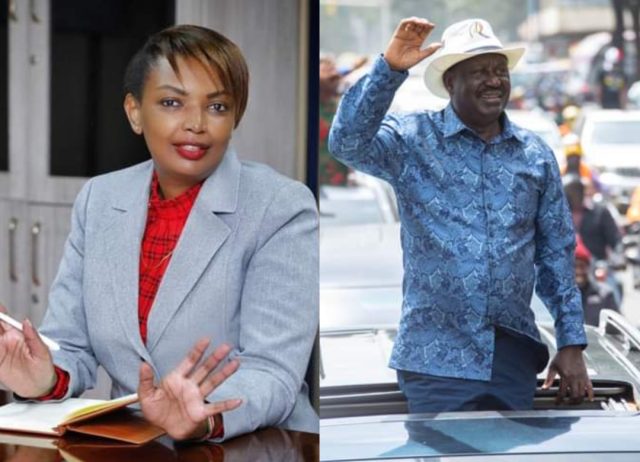 Karen Nyamu should keep off Raila Odinga’s name out of her mouth.

The angry reactions came after she made comments after Raila’s grand return and the mega rally that went down yesterday at Kamukunji grounds.

Karen says,”In politics i have mastered something called reading the signs of the times. And this is where Baba Raila Amollo odinga and Martha Karua seem to be showcasing cluelessness.”

She further adds,”President Ruto was vehemently against the 2018 handshake and its repercussions.”

“Anybody who imagines maandamano will lead to negotiations with the president is deluded. Hampati hata chembe. Pls go back to the drawing board.” According to Mugithi singer, Samidoh’s lover and baby mama.

Kenyans have told Karen Nyamu off, saying she’s chewing more than she could ever swallow her entire life.

A majority of the people who reacted feel for someone who was nominated, she should focus with Samidoh and stealing husbands as Raila Odinga is beyond her level politically.

In her usual character,  senator Karen likes to poke anger by making her infuriating comments on popular trending topics and public figures.

Check out how Kenyans have reacted to her disrespectful comments about Raila Odinga’s public meeting.

Photos of Kylian Mbappé’s Girlfriend Who Was Born A Man Before He Changed His...

Mulamwah Calls Out Carrol Sonnie For Turning Down His Financial Help