Kenya is currently working on some multi-billion projects that are expected to spur development as it moves towards achieving its 2030 economic vision.

Some of those projects include; 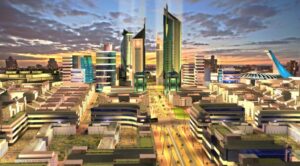 Konza Technology City is a smart city project that is currently under development in the country’s eastern part. The project is part of Kenya’s Vision 2030 blueprint and is expected to create over 17,000 direct high-value jobs and another 68,000 indirect jobs upon completion.

The construction of this project is expected to cost Kenya about the US $14.5bn.

This is Eastern Africa’s largest and most ambitious infrastructure that brings Kenya, South Sudan, and Ethiopia together.

The program consists of seven key infrastructure projects and is expected to cost the three countries over the US $13bn.

Kenya is planning to convert the Nairobi-Mombasa Highway to a dual carriageway to solve the increasing traffic congestion between Nairobi and Mombasa.

The project is expected t cost up to US $3bn.

It involves the construction of the second phase of the second container terminal at the Mombasa port. The project was expected to start in January 2018.

Phase one of the project was completed in September last year and has been handling 550,000 TEUs. The second phase of the port will handle another 450,000 Twenty-Foot Equivalent Units (TEUs).

Construction of the 27km Nairobi Express Highway is currently ongoing. Upon completion, the expressway is expected to ease traffic congestion with Kenya’s capital.

The high begins at Mlolongo, as it connects JKIA to Nairobi’s CBD before its ends at James Gichuru in Westlands.

“You Fill A Void In My Heart” Diana Marua Pours Out Her Heart To...

Kenyan Communities And Their Talents