A landlady in Kakamega ensured a family spend the night in the cold after she set their house ablaze, over a disagreement on payment of house rent.

The landlady identified as Caroline Mukolwe was demanding house rent amounting to a measly Shs 800.

Reports indicate Ms Mukolwe had approached the tenant last evening demanding for house rent but the tenant  Teresia Ayeng, could not raise the total amount at the moment. Instead, she offered the landlady Sh400 pledging to clear the balance in a few days.

However, Ms. Mukolwe was apparently irked and would hear none of her pleas.

The situation quickly deteriorated then Ms Mukolwe rushed back to her house and came back running holding a bottle full of kerosene and a matchbox.

She entered the tenant’s house, doused her bedding and clothings with the kerosene and set it ablaze reducing the poor woman’s belongings to ashes.

According to neighbors, Ayeng who could not come to terms with what had befallen her, had tried in vain to plead with the landlady, but her pleas fell on deaf ears.

” This landlord is truly an evil woman, I wish I had some money to help the poor woman,” one neighbour was over heard synpathsizing.

Police officers in Mumias have since arrested the suspect who shall be arraigned in court. 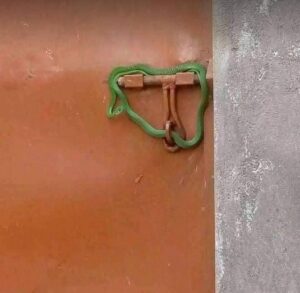 Elsewhere in Kitui, there was drama when a famous landlord locked a door for one of his tenants with snake. The tenant had stayed for three months without paying—all along he has been saying,”kuna deal nangoja,ikiivana hivi nitalipa”.The landlord became impatient and decided to do the unthinkable.

The landlord then locked the door using a green mamba and disappeared.

The tenant identified as Mutiso on learning what happened screamed for help from bewildered villagers.

The tenant was forced to pay the rent arrears and warned against repeating the same mistake.

Karen Nyamu Advises Samidoh About Being A Polygamous Husband