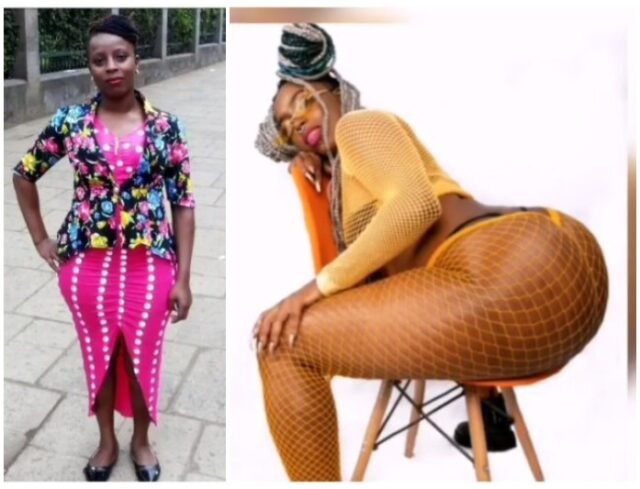 Manzi Wa Kibera used to have flat buttocks like an iron box, she took pills to enlarge her booty but suffered serious side effects.

The controversial socialite first opened up about enlarging her body during an interview on NTV.

“I met a friend in the Ghetto, who told me I look good on the front and not the behind. So it was a must I do something to look good. We contributed money, we went and bought. I am not afraid, mimi nilibuy matanye,” Manzi was Kibera said.

The ratchet socialite confessed that she opted to take pills which is the cheapest way to increase booty as she couldn’t afford surgery which is safer but way more expensive.

“I can not afford surgery, I took pills, I bought them for around Ksh7,500. That was for three days, then after 3 days, another Ksh7,500. I took the pills for 6 months,” she confessed.

She further divulged that she experienced nasty side effects as her booty grew disproportionately.

“I encountered many side effects…at first saw it growing on one side…I feared walking outside. I would accuse my friend of misleading me. But we went back, I was given another pill and they started balancing,” she said.

She explained that buttocks enlargement requires one to take the pills frequently. Manzi Wa Kibera revealed that when she can doesn’t have money to buy pills she settles for padded bikers to hold her fake booty in position so that they don’t sag.

“Before I was flat, I was an original Kikuyu. Right now my demand is high, every man likes it. I still take the pills, you must renew them after 6 months. I was once broke and could not buy the pills, the shape changed. When I am broke I wear biker shorts,” she explained.

Manzi Wa Kibera once again talked about her fake booty in a recent interview with Mpasho.

“Hii mali safi legit and siwezi wadanganya ni original. The booty is not from God but from a doctor. I bought pills because I can’t afford a plastic surgeon yet but I will be visiting one in November for a surgery,” she said.

“I used to wear deras and stay indoors because the moment I’d step out, my neighbors would make fun of me until when I applied serum and I’m good now.”

Related: Manzi Wa Kibera: Eric Omondi Is A Great Lay, We Dated In Secret When He Was With Chantal

8 Times Koffi Olomide Had Brushes With The Law With Cases Ranging From Assault...