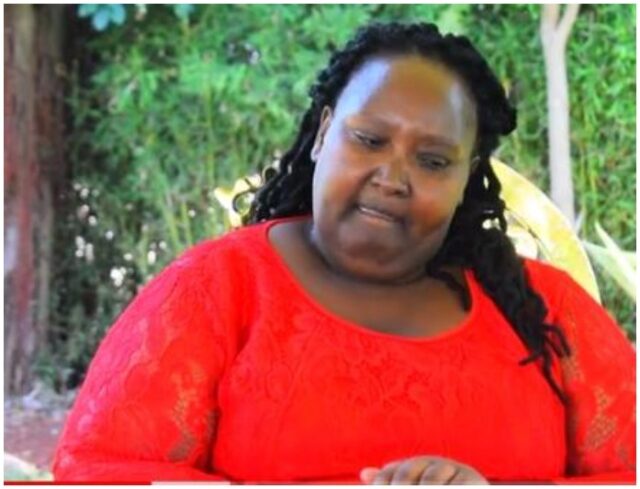 Mother-In-Law actress Maria defied her husband and paid a big price for going against what he ordered her to do, the root cause of her marriage to hitting rock bottom.

Maria, whose real name is Sophia Muhia, opened up about her failed marriage during an interview with Gikuyu YouTuber.

The Mother-In-law actress revealed that she got married to her husband when she was only 20 years old.

Maria noted that her husband made it clear to her that he wanted to have two wives each giving birth to two kids only.

She enjoyed a blissful marriage until when she was 33 and got pregnant with her third child – very big mistake.

The Citizen TV actress said all hell broke loose when she informed her husband that she was pregnant with their third child.

He got very angry with her and left their matrimonial home and went ahead to marry another wife.

Maria said she went through the pregnancy journey alone thinking that when she gives birth her husband would come back but that never happened.

The mother of three raised her children as a single parent after it dawned on her that her husband was never coming back.

She disclosed that her estranged husband to date has never even seen their lastborn in person, she says since the day he left he has never bothered to check on their three children.

The mother-in-law actress is grateful to God as He has enabled her to raise three children all alone, her lastborn is in form three.

Maria didn’t remarry but focused on raising her three children, she urged single women not to give up and take care of their kids with love.

“Men Will Eat Whatever It Is” Zari Painfully Recalls How Diamond Cheated On Her...