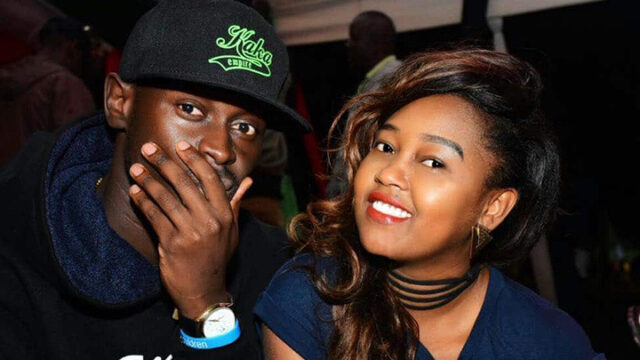 Nana Owiti and her husband King Kaka are not following each other on social media to the surprise of everyone.

Curious fan thought Nana and King Kaka had unfollowed each other after noticing the couple were not following each other.

However, Nana took to social media to explain that King Kaka and her have never followed each other on social media.

“For the curious ones that are constantly asking this question. I don’t follow him and he doesn’t follow me. We have NEVER followed each other on these streets. We follow each other to our home and to church (most time recently),” wrote Nana Owiti. 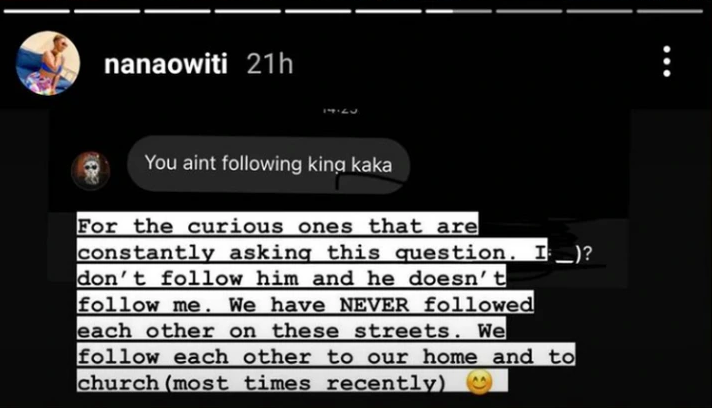 Some netizens however speculated that Nani and King Kaka don’t follow each other because of the cheating scandal.

Nana Owiti once dumped the rapper after he cheated on her with singer Sage Chemtai whom he impregnated. Sage gave birth to a baby girl called Ayanna on March 28th 2014.

In an interview with Massawe Japanni on radio Jambo in March 2021, Nana revealed that she was so heartbroken when she learnt of King Kaka’s infidelity.

Nana, whose real name is Nini Owiti, told Japanni that she learnt that Sage was expectant with King Kaka’s baby at a time when she was also pregnant with their first child Gweth.

“It was painful to learn of the news, of course. It was almost like an ultimate betrayal. We actually broke up for seven months before getting back together,” Nana said.

“The only reason I stayed (in the relationship) after what he did, is because of what transpired after. He said sorry. We are all at fault. We all have baggage which vary from one person to another, his mistake was cheating on me. I had my faults too. I came to him carrying my baggage as well.”

Nana met Kaka during his early days while trying to break into the music industry, then he was going by the name Rabbit, and had a merchandise store at Imenti House.

She said she made the first move while the rapper did the ‘chasing’ and the rapper later changed her name Nini to Nana.

Nana and King Kaka are blessed with two kids, Gweth and Prince Iroma. Before the two children, the couple suffered a heartbreaking miscarriage that Nana later shared with the public.

Related: Celebrity Kids That Started Earning Millions The Minute They Were Born

Miracle Baby’s 23 Year Old Baby Mama Breaks Down Into Tears While Begging For...