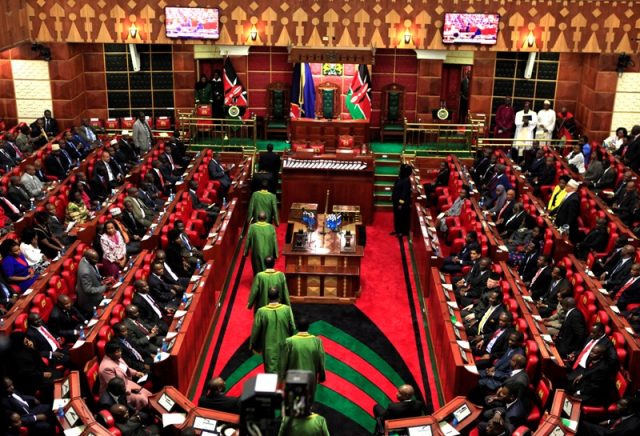 MPs have shunned their political differences to demand sitting and mileage allowances.

Salaries and Remuneration Commission (SRC) abolished sitting and mileage allowances for Members of Parliament (MPs) with effect from August 9.

MPs earn about Ksh5,000 for every sitting and the abolishment of the allowances for plenary sessions in the National Assembly and Senate was meant to ease the pressure on the public sector wage bill which is currently at Ksh930.5 billion annually.

However, National Assembly Speaker Moses Wetangula has assured Members of Parliament that their car allowances, mileage reimbursements, mortgage, and other benefits will remain intact.

Wetangula who is also the incoming chairman of the Parliamentary Service Commission (PSC) said he has held consensus talks with SRC to revert allowances for lawmakers.

“I want to assure you Members that this morning-the reason we came a little late, I was having a meeting with SRC on your behalf, and we have called them to order on a few things and we believe before we finish this induction, I will be able to make several pronouncements on your privileges and your other desired facilities for you to do your work,” Wetangula said in his opening remarks during an induction workshop for MPs.

“Nobody in their right frame of mind will interfere with your car allowances, mileage reimbursements and with your mortgage and everything else that you have been having because that is your entitlement,” he added.

Wetangula further called on MPs to take a mortgage scheme as early as possible saying it would be easier for them to service them.

“Take the earliest opportunity to take your mortgage now, it is the cheapest mortgage in the market with 2 to 3 percent interest and buy yourself at least an abode where you can be able to operate from.”

Comedian Njugush scoffed at the MPs’ move to restore their sitting and mileage allowances.

While commenting on Wetangula’s sentiment in a post on social media, Njugush wrote; “Probably a good time to remind you ,you are alone…they are together. Anyway nimeguess.”

Huddah Monroe Reveals Why She Didn’t Vote In The August 9...

Ray G - August 12, 2022 0
The August 9, 2022, general election was marked by low voter turnout. Huddah Monroe was among the millions who didn't vote. Independent Boundaries and Elections...