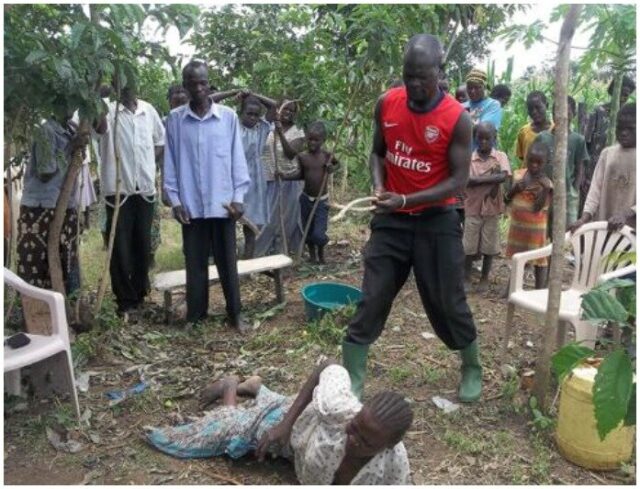 Linet Aswani from Vihiga County was caned by village elders after she cheated on her husband with a neighbor, this after she also seduced a series of other married men in the village.

Trouble started when the neighbor’s wife reported the 40-year-old woman to village elders, she complained that her marriage was being ruined by an extramarital affair Aswani had with her husband.

After hearing the woman’s complaints, elders went to Aswani’s house and ordered her to accompany them to a baraza where they met some youth who pinned her down before she was ruthlessly flogged.

“They came into my house and took me along with them after ordering me to accompany them and since I could not resist. I agreed and went with them. However on getting to one of the streets, they ordered me to lie down after which they started caning me in public. I tried to resist but they had a number of youth who pinned me to the ground,”Aswani recalled her ordeal.

The 40-year-old cried foul saying she was unjustly caned yet she never had an affair with the neighbor she was accused of secretly dating.

Aswani says the elders falsely accused her of wrecking her neighbor’s marriage and also seducing all men in the village.

However, Aswani didn’t deny claims of seducing all the other men in the village but also made it clear that it was the woman’s husband who was allegedly making advances on her.

She called upon police officers from Vihiga to intervene and make sure that she receives justice because according to her the punishment was uncalled for.

Aswani further claims the elders stole the money she had in her pocket after ordering her to pay a sum of Ksh.5000 as penalty for her crime.

Related: Atwoli Addresses Claims of Turning His Home into a Drinking Den for Politicians

Lingala Ya Yesu Singer Pitson Ends Up Being A Pastor

“My Husband Is A Toxic Person” Sarah Kabu Comes Clean On Her Breakup With...