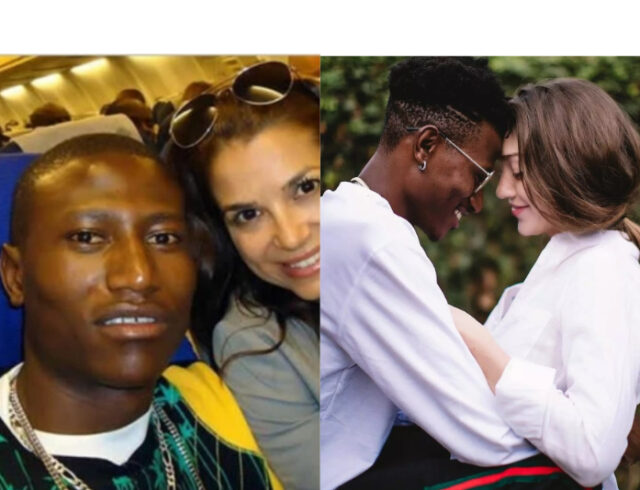 Octopizzo has dated multiple white women and married at least two leading to the assumption that he only prefers Caucasian ladies.

The rapper was married to Mexican lover Christine Fernandes for many years before they broke up in 2015. The two have a daughter together.

Speaking on his breakup in a 2021 interview with Mwafrika, Octopizzo said his Latino baby mama was a bully.

“She used to bully a little and felt like the bigger person. For instance, if we were to buy a seat she would insist on having her way without compromise. Eventually, I told her that I need to create my home the way I have dreamt it to be, what I have been working towards for me and my family. That is how we broke up, in 2015. People don’t know this,” Octopizzo said.

Octopizzo married another white woman in December 2021 in a colorful wedding held in his village in Ugenya, Siaya county.

The wedding was low budget, conducted in a Church in Ligega village and attended by locals who went to witness the rapper exchanging vows with his mzungu sweetheart.

Fast forward to August 2022, Octopizzo dismissed claims he only prefers to date white women while speaking during an interview with Mzazi Willy Tuva on Mambo Mseto.

The rapper insisted that he had dated more African women than white ladies.

“I did my wedding in December last year. I have done three weddings, and there’s one remaining. This is because I love my wife. Harusi huwa si moja, hio ni labda ya Wakristo wale husema lazima iwe moja. Unaweza fanya harusi kila mwaka ukitaka,” he said.

Octopizzo said that every time a wife gives a man a child or treats him right, there should be a wedding.

The rapper said he has dated so many women in the past before he found someone who could understand him and give him peace.