ODM boss Raila Odinga is set to name his running mate in February next year but it is his choice that is set to shock the country.

Sources in the know of behind the scenes lobbying by President Uhuru Kenyatta’s key Mt Kenya allies tell us that the names being bandied around as Raila’s running mate are a mere smokescreen and that the powers behind Raila’s presidency have settled on Equity Bank CEO Dr James Mwangi.

According to our source Dr Mwangi will bring respectability and acceptability for the Raila ticket especially in the vote rich Mt Kenya region.

“ Dr Mwangi is revered in the world of leadership and business and he brings to the table that wealth of experience and a colossal network of monied elite, “ said the source.

“If there is anyone who is erudite in the bottom-up economy then he is a Mwangi and the campaign trail he will deconstruct all the nonsense that Dp William Ruto and his Tanga Tanga brigade are selling to the naive masses,” added the source.

The thinking within Raila camp is that the stature of Dr. Mwangi will be unmatched by whoever Dp Ruto shall front as his running mate and that other than bringing authenticity, he is coming without past leadership baggage.

In the recent past, political heavyweights angling to succeed Uhuru as the Mt Kenya political leader have been fiercely fighting to be Raila’s choice for running mate.

It is widely believed that whoever makes it to be the opposition chief’s running mate next year will automatically succeed Uhuru as the region’s political kingpin.

But Raila’s vocal ally Kieni MP Kanini Kega insists that the President will have the final say on who will be Raila’s running mate.

“People who are trying to position themselves are putting the cart before the horse. It is the President who will ultimately make the final decision,” Kega said in an interview with the Star.

On the other hand, nominated MP Maina Kamanda who has been campaigning for Raila in the region admitted that various politicians have intensified lobbying to catch the attention of the ODM boss.

The former Starehe MP who has endorsed Raila for President, however, cautioned that the opposition chief should be allowed a free hand to pick whoever he prefers.

“Let nobody impose a running mate on Raila. Let him pick a person with whom he has chemistry to avoid scenarios like the ones we have seen with William Ruto rebelling against his boss,” he told the Star.

Kamanda insisted that the running mate must come from Mt Kenya because of the region’s numerical strength and as part of a deliberate plan to address voter apathy.

“Mt Kenya has more than six million voters and for them to turn out and vote they must see that one of their own is on the ballot,” the MP said.

Additionally, factions have emerged among Mt Kenya leaders who are pushing Raila to pick his running mate from there.

There is a Muranga group that argues that it’s time that the county – home to most Kikuyu tycoons and wealthy businessmen – produced the second most powerful post given that there will be no presidential candidate.

And they might just get their wish if Raila were to settle on Dr. Mwangi.

And if Dr. Mwangi were to kiss out then the group would welcome PeterKenneth, a former planning minister and one-term Gatanga lawmaker to be Raila’srunning mate. 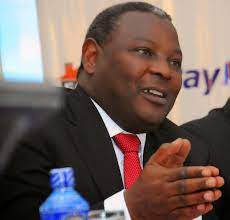 Hon Kenneth has been close to Raila and sources say Raila’s allies prefer him for the running mate post.

Kenneth is said to enjoy the backing of the powerful Mt Kenya Foundation club of wealthy businessmen as well as the influential nominated MP Maina Kamanda.

Controversial pundit  Mutahi Ngunyi on his part has suggested that Raila would win the 2022 presidential race if he picked Karua as his running mate.

“At this rate, Raila will have to work very hard not to become President. Especially if he runs with ‘happy birthday’ Martha Karua. This #rarua ticket is the one. Think about it,” he tweeted.

Laikipia Governor Nderitu Muriithi, a nephew of retired President Mwai Kibaki and who has forcefully come out in support of Raila is another possible candidate for the slot.

Party secretary-general Mugambi Imanyara said the party will hold a National Executive Committee meeting where they will endorse Muriithi to the position.

“The Laikipia governor fits the bill for a running mate in our view,” Imanyara said.

Then there is Lee Kinyanjui who hosted Raila’s first Azimio la Umoja campaigns in Nakuru and who is seen as Uhuru’s key confidant in the 2022 succession race.  The governor is said to have formed his own  Ubuntu Peoples Forum party.

The governor has also been accompanying Raila in his Mt Kenya trips in efforts to turn the tables on Deputy President William Ruto.