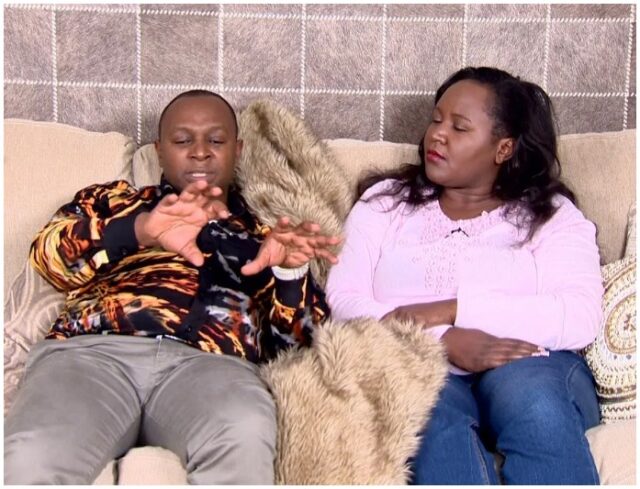 Sarah Kabu came out to seek her husband’s forgiveness after demanding peaceful separation during their breakup drama.

The whole drama started on Sunday April 3rd when Sarah bitterly complained that her estranged husband had bribed police and took away their two children.

However, Simon Kabu denied everything Sarah said while engaging his fans on Instagram in an interactive Questions and Answers (Q&A) session.

He claimed that all was well in his marriage with Sarah when asked if they had broken up.

Sarah however spilled the beans on her troubled marriage while speaking to Tina Lewis in a tell-all interview.

According to Sarah, this is not the first time they are having marital problems, they have been having issues since 2013 but she had just been pretending that everything was fine since she is a public figure.

Sarah further disclosed that she has been going through a lot where her husband hurts her and she is always crying in pain but she couldn’t speak it out.

Sarah stated that she was tired of living a fake life and she only wishes to have a peaceful co-parenting with Simon.

“We have been discussing separation, I have been telling him like I don’t feel so comfortable in this marriage and I am tired of faking. So we were in discussion,” Sarah said.

Just days after the interview, Sarah Kabu took to Insta Stories and denied everything she said before.

The mother of two claimed that she was in distress and everything she said earlier was misleading. She further asked her husband for forgives and begged him to sort out their issues privately.

“Sorry my fam. When I was in distress I said things that I shouldn’t have said online and thus misleading. Life is a lesson and we learn everyday. Forgive me Simon. Lets sort our issues off-line. All is well. Please keep us in prayers #Marriageworks,” wrote Sarah Kabu.

Sarah and Simon Kabu have since made first public appearance for the days after she sought his forgives. The couple posed for photos as they saw off their clients who were going for a trip.

Related: No Peace In This Paradise! Photos Of Simon And Sarah Kabu’s 5-Bedroom Mansion

Makena Njeri Photos that broke the internet On Her 30th Birthday

Nigerian Man Offers Mombasa Lady Ksh22,000 As Apology After She Is Humiliated By Naija...

Nadia Mukami: Promoter Forced Me To Perform Right After I Suffered Miscarriage