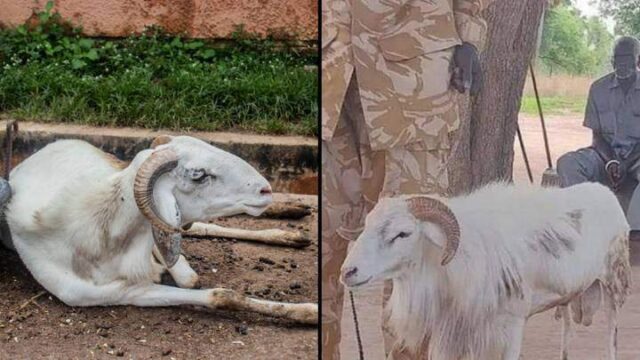 A sheep was sentenced for killing a 45-year-old woman, which is an unprecedented ruling in the history of court rulings.

The sheep in South Sudan was sentenced to three long years for killing the woman as reported by Eye Radio.

The accused sheep attacked and killed the woman identified as Adhieu Chaping in Rumbek East.

Adhieu Chaping was left with broken ribs that caused internal bleeding which resulted in death.

The death of the 45-year-old woman prompted the authority to act expeditiously and seize the sheep taking it into police custody at once at a police station in Maleng Agok Payum.

The owner of the sheep wasn’t found inculpable of any crime committed by his sheep that caused the death of the poor woman.

“The owner[Duony Manyang Dhal] is innocent but the ram is the one who perpetrated the crime so it deserves to be arrested. The case will be forwarded to a customary court where it can be handed amicably,” Rumbek East’s Major Elijah Mabor confirmed the incident.

The owner of the sheep that headbutted the deceased, Duony Manyang Dhal was ordered by the court to hand over five cows to the deceased family in compensation.

The guilty sheep will live with the bereaved family once it gets released from custody after it served its sentence.

University Student On The Run After Beheading Girlfriend And Scattering Pieces...

Ray G - January 5, 2022 0
A 20-year old University student is being sought by the Molo sub-county police officers over the gruesome murder of his girlfriend. Mark Njoroge Wanjiru, a...