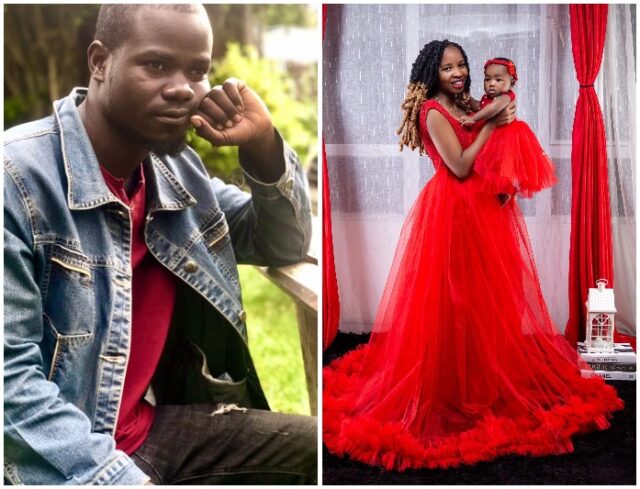 Mulamwah fears his daughter Keilah Oyando is being raised by an irresponsible mother as he accuses Carrol Sonnie of drinking while lactating at the same time.

The comedian came out to accuse his baby mama of neglect after she shared photos of herself having a good time with another man.

Sonnie is seen in one snapshot with a man on what appears to be a date at a high-end restaurant.

Speaking during an interview with SPM buzz, Mulamwah said it hurts him to know that his baby mama is going out drinking alcohol while she is still breastfeeding their daughter.

“You feel bad, especially when you know that someone’s drinking and lactating at the same time. But kila nyani na starehe yake!” Mulamwah said.

Mulamwah went on to add that it’s particularly hurting because the child involved is a girl.

“I feel bad because the child is a girl. If it was a boy, it would be okay. Maybe this girl will be brought up in a different home coz the mother is absent. If it was a boy ningemwachia but girl anataka kuwa kwa custody ya babake.”

Mulamwah further took a swipe at Carrol Sonnie for posting her new boyfriend in an Instagram account they used to to jointly operate.

“Because it would be disrespectful for her to publish her boyfriend in the account we jointly formed, that would be rubbish, upuzi bana,” he ranted.

Mulamwah defended himself when asked if he controls Sonnie’s account to the point where she had to leave it to him and go on to another one out of jealously and jealousy.

“It isn’t at all jealousy. What is the nature of that business?
People should go far with it (posting their boyfriends), Haiwezi.”