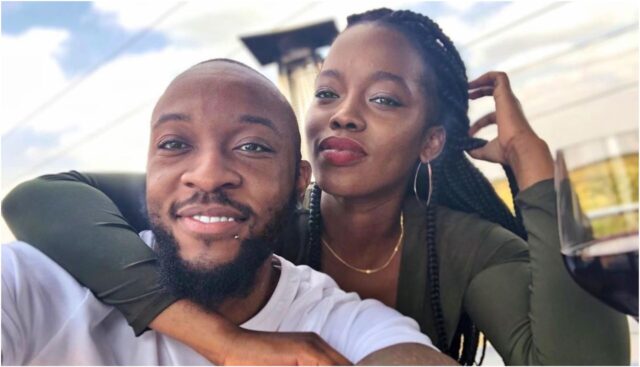 Corazon Kwamboka is finding it hard adapting to life as a single mother barely a month after she announced her breakup with Frankie.

The mother of two on February 20th 2022 announced breakup with her baby daddy Frankie marking an end to their two year relationship.

A grieving Corazon took to social media to announce that she is now single, giving a hint that she had tolerated a lot for the period she was with Frankie.

Corazon and Frankie’s breakup came as a shock to many people because they had just been blessed with their second child in December 2021 and they seemed like they were enjoying a blissful relationship.

After hooking up with Frankie, Corazon Kwamboka hastily got pregnant for him in quick succession, maybe to tie him down completely and ruin any chances of him getting back with his baby mama Maureen Waititu.

The socialite gave birth to her first child sired by the gymnast on August 9th 2020. She got pregnant again and gave birth to baby number two, a girl, on December 8th 2021.

Even though she got pregnant for Frankie in quick succession, he still broke her heart into tiny pieces.

The mother of two has now revealed that she is battling depression brought about by her breakup with Frankie.

Corazon promised to talk in detail about her nasty split with her baby daddy once she gets over the pain she is feeling.

“Yes I have struggles with depression. What I’m going through is not easy and I’m not the only one who has gone through it. One day when I heal I’ll address just to encourage and give strength to another woman who feels how I feel. For now’ I ask for privacy. Thanks for all the beautiful messages,” wrote Corazon Kwamboka.

Related: Corazon Kwamboka Reveals What Frankie Did To Her To Cause Their Breakup, Deletes All Of His Photos

Real Reason Why Pastor Nganga Desperately Tried To Shut His Wife From Speaking At...