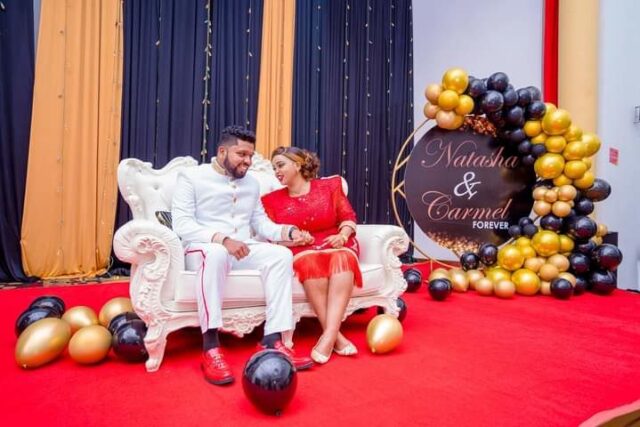 Prophet Stanley Carmel beat Kenyan men in winning the love and affection of city preacher Rev Lucy Natasha who had been single for years.

Carmel and Natasha got married in a traditional wedding on January 29th 2022.

Natasha opened up about how Carmel won her heart during an interactive Questions and Answers (Q&A) session with her fans on social media in February 2022.

The city preacher revealed that she met her Indian husband on social media after he slid into her Instagram DM.

“He DM then, I physically met him in Dallas, Texas,” Natasha said.

“I love that she is compassionate, everything about Natasha. She loves life and she is courageous and many women around the world look up to her,” Carmel said.

“I love how sweet and romantic you are. The way you spoil me and bring out the girl in me.”

Fast forward to August 2022, Carmel talked about sliding in his now-wife’s DM on Instagram and Natasha only responded after two years.

The veteran city preacher Natasha said that she prayed hard for a man before meeting her husband Prophet Stanley Caramel.

The couple told People Daily of their love journey and it is an amazing one, “I wanted to get married when the timing was right, I asked for a prayer partner. God answered my prayers.”

Carmel talked about sliding in his now-wife’s DM on Instagram and Natasha only responded after two years.

“I came across her videos on Instagram in 2017 where she was preaching about a royal wedding. Her beauty stood out.

“I went online and followed her on Instagram, and in true online fashion, I shoot my shot and sent her a message. Well, she never replied, but for two years, I sent her messages of encouragement, prayers name it,” Carmel said during a joint interview with his wife on People Daily.

The Empowerment Christian Church preacher explained that the reason she ignored Carmel was because she received many DMs.

Rev Natasha further noted that the consistency of Prophet Carmel was what made her reply to him.

“I’m a patient man, and because it is said good things come to those who wait, this is the testimony,” Carmel said.

“We met in Dallas, we talked for hours on end. The conversations were natural and the chemistry was effortless. We were vulnerable with each other, but one thing we were sure about was that it was the begging of something beautiful,” he added.

Vera Sidika Opens Up On Her Plan To Get Pregnant With...

Titi Maasai - January 6, 2022 0
Vera Sidika and her husband Brown Mauzo plan to have children in quick succession, the bootyful socialite is optimistic that she will get pregnant...