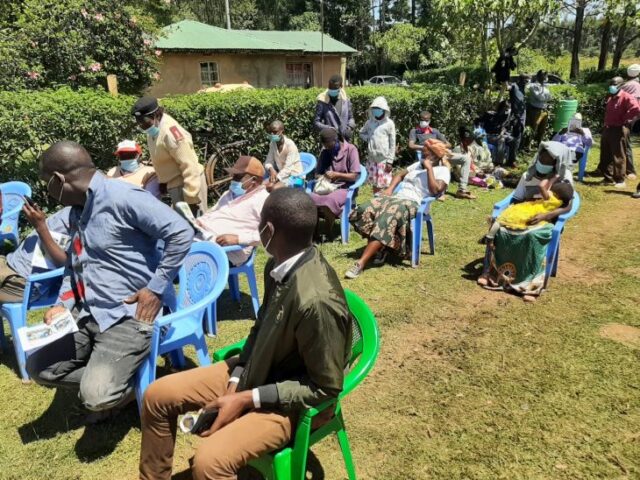 There was drama at a funeral in Motosiet Village, Trans Nzoia after the area assistant chief demanded mourners to observe Covid protocols.

The administrator and the mourners engaged in a shouting match after she stormed the funeral demanding that mourners should observe the protocols or else the funeral be stopped.

Jackline Wamalwa had been tipped off by  mask vendors that the mourners were not wearing masks as well as not observing social distance.

The unshaken mourners however told the chief off saying that there was no corona in the village.

“People from the villages do not suffer from Corona. This disease is only found in towns,” a local said.

Wamalwa ordered those who did not have masks to leave the funeral but they refused to obey her orders.

“We went to school with you. You cannot bully us. You must allow us to mourn our fellow villager,” some of the villagers shouted.

What angered her was that most of the mourners were keeping their masks in their pockets.

She resolved to use force against those who refused to follow her orders whereby their photographs were taken for further action after the funeral.

“I need all of you alive. Those who do not have masks should leave this place to avoid infections and make sure when you stretch your hands you do not touch your neighbor,” she ordered.

The villagers however continued shouting at her but she stood her ground saying that they will have to follow orders or the funeral gets cancelled.

“The church should spearhead the Covid-19 measures. I have three funerals and cannot follow the locals arranging them as the church should be the first ones to ensure you members adhere to laid down rules. So let ‘s keep social distance before padre arrives or the funeral is stopped,” noted the agitated chief.

The villagers continued with their protests infuriating the local administrator who threatened to call police for strict enforcement.

RELATED STORY: Kianjokoma Brothers To Be Exhumed From Their Graves Anytime

Chiki Kuruka Pens Down Heartfelt Messages To Her Husband Bien As Well As Makena...

Huddah Monroe Vows Not To Get Married To An African Man After Her First...