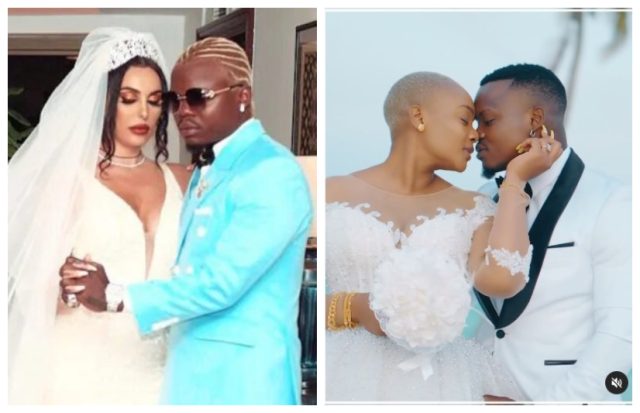 Harmonize and his ex-wife Sarah Michelotti are set to officially divorce each other ahead of the singer’s wedding with Kajala.

Sarah announced she was in Tanzania last week when she was seen enjoying a good time in Zanzibar.

It has now been established that the Italian is in Tanzania to follow up on her divorce from the singer.

Sarah was seen on Tuesday morning September 27, 2022, arriving at a Temeke-based court accompanied by her family.

It has been rumoured that she has been consulting lawyers and intends to take all that he gave to Harmonize. It has been claimed that some of the properties that the Konde Music Worldwide boss owns, including labels, houses and several cars, belong to his former wife.

Sarah and Harmonize broke up after he introduced his daughter to his social media fans. At the time, Sarah said she had started filing for divorce.

“On the day he posted the baby, we had officially separated. In 2018, we fought and separated for three months, I went to Italy,” she said in a past interview

“Everything started in March. Harmonize changed a lot, he used to leave me alone at home and sleep out at night, he would pick fights just not to come back home. July, I went to Italy and he was not checking up on me,” she added.

Sarah further revealed that Harmonize was cheating on her with Kajala whom he introduced to her as his sister.

“He started dating Kajala in October 2020 and I came back to Tanzania in November, I asked him about the relationship but he said she is his sister and he couldn’t date her because she is old and they were just friends.

“When I started a relationship with him and he was dating Wolper, he was also dating Kajala because I saw the messages. I don’t have a problem with Kajala but with my husband, because he lied,” she narrated.

“Did I Ask God To Create Me This Way?” Pritty Vishy Cries After Trolls...

Jua Cali Recounts What Made Him Fall For Lilly Asigo When They First Met While...