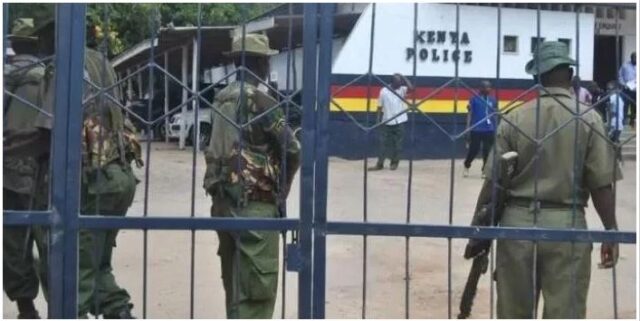 Operations at a Tana River police station were disrupted after prison officers stormed the station demanding for the release of their colleague.

8 officers led by their inspector stormed the Madogo police station on Thursday with their guns corked while demanding for the release of their colleague who had been arrested for flouting curfew rules.

During the commotion, the prison inspector attempted to grab the occurrence book however the office personnel were swift enough to prevent that.

A Police present tried to forcefully remove him from the office leading to a scuffle. He was forced to call for back up but one of the  prison officers fired his gun in a bid to scare away the rescue team.

“Commotion ensued and an officer who was present raised an alarm and officers responded swiftly. One of the prison waders fired one round so as to scare the rescue team who were responding to the distress call,” one police stated.

The officer in custody is said to have assaulted two police officers during his arrest. One of the police officers was injured on his hands while his colleague sustained multiple injuries on the face.

“The prison officer who had been arrested for contravening curfew orders and while he was being arrested he turned violent and assaulted two police officers who sustained injuries on his right-hand palm and elbow after being strangled and pushed to the ground,” the report recorded at Madogo police station read.

“The other officer sustained injuries on his lower and upp er lip and his right index finger,” the report read.

This comes amid a campaign by National Police Service Commission to address the issue on the rise of incidents of murder and suicide among police officers.

Photos Of Anerlisa Muigai’s Car Dealer Boyfriend Melvin Ibrahim Whom She Has Been Hiding...

“People Are Mocking Me But They’ve No Idea” Jaguar Responds To Criticism After Being...

Drama As Two Women Show Up In Court Claiming To Be Felista Nyamathira Who...