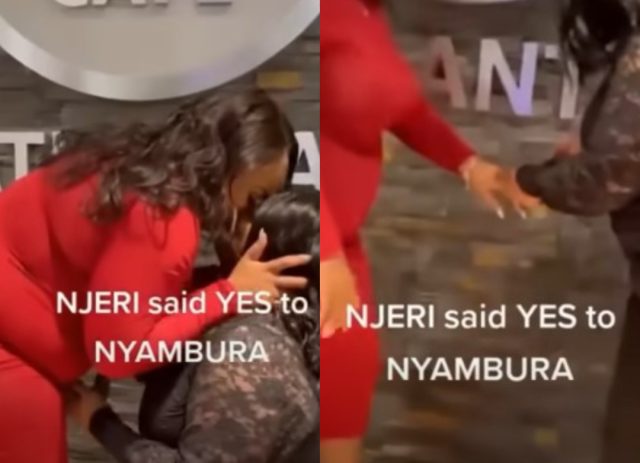 Two Kikuyu women, Njeri and Nyambura have allegedly married each other.

In a video that has created confusion and reactions, the women exchanged kisses and rings. Dressed in red and black, they seem so happy to have finally committed to each other, as husband and wife.

Kibe Andrew shared the video reaction to Njeri and Nyambura’s wedding saying the world has surely lost it.

This should not be happening he says. Recently, there were reactions all over Kenya following the gruesome murder of fashion star, Edwin Chiloba. Chiloba was reportedly killed by his jilted lover, Jackton Odhiambo after suspecting he was seeing someone else.

“Let us not waste time discussing LQBTQ or whatever name they call it. It’s illegal, God doesn’t like it and we should not entertain it. On this one Democracy my foot! Jail them,” Mohammed Ali tweeted.

The entire concept of homosexuality is prohibited by Kenya’s constitution.

Any person who engages in “unnatural offenses” or “carnal knowledge against the order of nature” faces up to 14 years in prison, according to the Kenyan Penal Code, which goes back to the British colonial era (up to five years).

It’s not yet known if the two are actually Kikuyu women, but there are names captioned Njeri and Nyambura.

Photos of Harmonize’s 2nd Multimillion Shillings Home Which Is Bigger Than His Current Mansion...

YouTuber Elodie Zone Puts Up Her Cat And Dog For Sale As She Relocates...

“He Has Been Broke Since September” Eric Omondi Puts On Brave Face Even Though...