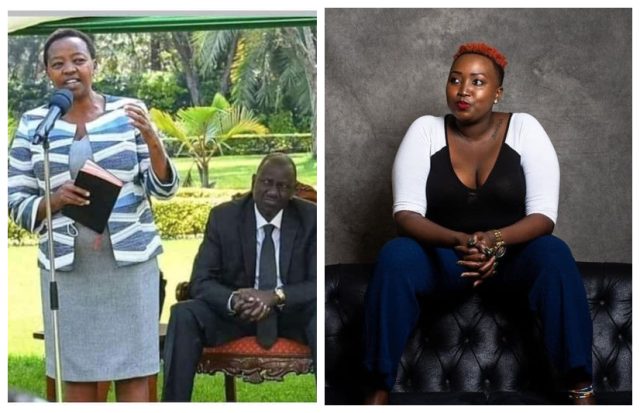 President William Ruto asked 40 pastors to cleanse the State House as his wife Rachel announced monthly prayer services at house on the hill.

Ruto on Sunday, September 25, made a special request to the clergy before officially moving into State House, Nairobi.

Speaking during a thanksgiving service held at the State House Gardens, Ruto, requested pastors to cleanse his official residence before he embarks on using it to discharge his duties.

He revealed that a team of 40 clergymen had been selected to lead the prayer session, which would see them dedicate the entire facility to God.

“After this service, there is a part two which may not be as organized as the first session. We will ask 30 or 40 of our senior clergy to pray over this building and this residence, and the offices so that God can give us solutions for this country.

“Do not leave after lunch, speak award of blessing on this grounds and around this compound, even on the farm, everywhere! Those who can speak in tongues, please do so, so that it is known that the new tenants have arrived,” Ruto said.

Ruto further asked the clergy to beseech God on his behalf that peace prevailed in the country following the banditry attack in Turkana that left 11 people dead including eight police officers.

“Pray so that the spirit of conflict and cattle rustling will be defeated. We are doing what we can do as a government to ensure we see the last of this kind of thing,” Ruto said.

Ruto also asked pastors to pray for those who are hungry so that they can find food.

“I want to request you to pray for put plan; so that for those who are hungry, we can find food for them, those who do not have shelter, we can build houses for them, to those who are sick, we can have a UHC for them,” Ruto said.

“I want you to pray for our economy because we are not in a very good place. As we speak today, we are chained to many debts; 65 per cent of our income is used to pay the debt. Things are difficult but we shall succeed.”

Ruto’s wife speaking at the same event announced that she will be holding monthly church services at State House.

“The Bible says ‘People will go up to Jerusalem, year after year, to celebrate the feast of the tabernacles’, and I think that this is a place where people will come year after year for Thanksgiving. I want to tell the church that this is not the last service we are having, you will be coming here month after month to give thanks to the Lord for doing us good,” she said.

Raey, though a Ruto supporter, asked the president and his wife not to turn State House into a church.

She further told Ruto to act to save the people dying in Turkana and not to pray about it.

“Am a Ruto supporter deadly but yeye na bibi wana overdo the whole religion thing. Our relationships with God are all personal don’t make it like your are special with Him. State House is not a church. Open a church to push that agenda. In the meantime people are dying in Turkana. Work on that don’t tell us to pray about it,” Annitah Raey wrote. 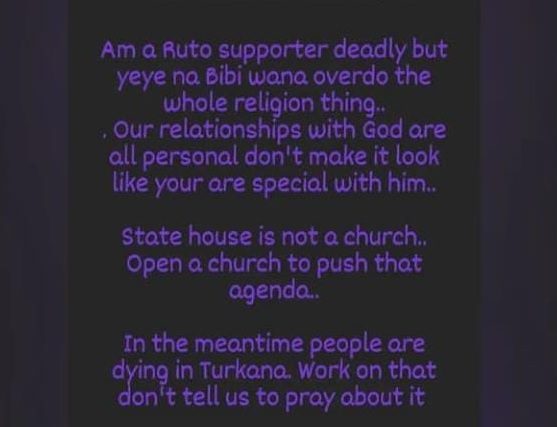